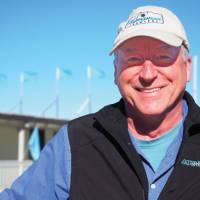 Born in Puyallup and spending 35 years of his life on Lake Tapps, Gary Buck has been on and around boats since he was very young.

At first, it was trailerable boats. Gary learned to waterski on Puget Sound behind his wife’s Father’s boat. At 26, Gary bought his first boat, a 14’ Fiberform ski boat. A few years later, his interest in boating grew when his brother bought a sailboat. Gary’s been sailing ever since.

“I love the smell of the salt air. I love the tidal changes. It’s always made me feel like you’re close to the heartbeat of the earth. As the tide moves up and down its like the earth breathing. Ever-changing.”

Before becoming a yacht broker and a sailboat owner, Gary was a regional sales manager for 17 years. His job had him crisscrossing the country. He knew he wanted to buy a sailboat and looked at boats in marinas all over the U.S. While in San Francisco, Gary and a surveyor were walking away from an obvious “NO” when the surveyor mentioned a 37’ Hunter he’d seen the day before. Gary looked at, purchased, and currently owns that Hunter. Today he happily calls it home.

“The idea that if you wanted to you could just untie from the dock and just go away. There’s an opportunity for freedom with a boat that you don’t feel when you live in a house.”

Gary bought his Hunter in 2008. That same year another thing happened, the economy collapsed. His company let their entire sales department go and Gary was out of a job. He considered retirement. He loved his new boat and the time he was spending at marinas and on the water. However, he missed the interactions he had in a professional sales organization. When he saw an ad from Waterline Boats to become a boat broker he answered it.

“I get to meet a lot of really nice people. And I get opportunities to do things that really escape anybody else’s opportunity window.. I help people to find boats and really make friends in an industry of people who are like minded. Its those opportunities that make the job really fun.”

Gary lives aboard his sailboat. When he’s not helping other boaters find or sell their boats, he enjoys sailing his boat north to enjoy the vistas and crabbing in the summertime.

Do you dream of life on the water? Call Gary and ask him how to make that dream come true.